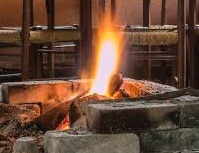 The first thing we are going to do is know the etymological origin of the term forge. In this case, we can state that it is a word that derives from Latin, specifically from “fabrica”, which can be translated as “craftsman’s workshop” and that emanates, in turn, from the noun “faber”, which is synonymous with “craftsman”.

The concept is used to refer to a stove which is used for forging from metals. By extension, the place where the forge is installed is known as a forge.

The fire in the forge is fanned by a bellows or other similar device that allows blowing a current of air horizontally. The firebox is lit between stones or bricks that are covered with a grid: with the bellows, the current is generated that allows it to be stoked.

It should be remembered that the action of forge consists of molding a metal through impact and compression forces. The smith or blacksmith uses the forge to heat the metal, which he holds with tongs to manipulate it. Then with a hammer, hits him on a anvil with the aim of forging it. Finally, once the part has been forged, it is cooled in a container.

The forge, therefore, is indispensable for forging metals. It is possible to build a craft forge for the growth of simple works, although in other cases the forge is larger and more complex.

A forge may consist of a space where the Coal to light and maintain the fire, and a bellows or fan that allows air to be sent to enliven the hearth. Due to its characteristics, the forge manages to preserve the hot for a long time. A hole, a grid and an ashtray make it possible to collect debris and pass air.

Within the field of art, the term that now occupies us has also been used to proceed to give titles to certain works. A good example of this is the painting entitled “The Forge of Vulcano”, which dates from the year 1630 and which was painted by the great Sevillian baroque master of international prestige Diego Velázquez (1599 – 1660).

Among his best-known paintings is that one, which he carried out while in Rome and which is currently part of the collection of the Prado Museum in Madrid.

It is an oil on canvas that has a size of 223 x 290 centimeters and that has a marked mythological sense. And it is that it comes to represent the moment in which Apollo, the sun god, went to the workshop of Vulcan, the blacksmith of the Olympian gods, to tell him that his wife (Venus) is being unfaithful to Mars , God of War.

As can be seen in the painting, Vulcano receives the news, being stunned and pale under the attentive gaze of his companions at the time.