The facade is he exterior facing of a edifice. The concept makes it possible to refer to all the exterior walls of the building but, in general, the term is used to refer to the main facade or front facade.

For example: “The owner of the theater has invested a lot of money to fix the facade”, “Tickets will go on sale at the ticket offices on the rear façade”, “The protesters threw tomatoes towards the facade of the municipality”.

The facade is usually the only part of a building that is perceived from the outside. This makes it very important in the architecture, since it is the element that expresses the characteristics of the construction and its style.

It is important to note, however, that the facades not only fulfill an aesthetic function, but must also be functional to the whole building, acting as a thermal and acoustic insulator and preventing the entry of water.

Conventional facades usually have a outer sheet (usually made of brick) and with a inner sheet. A thermal insulator (polyurethane, fiberglass or other material) is installed between both sheets, with a small separation so that the steam from Water can be ventilated.

In the case of commercial premises, the aesthetics of the façade is even more relevant than for private homes, since it can determine the entry, or not, of potential clients.

In colloquial language, on the other hand, the notion of facade is often used to name the presence or figure someone’s: “The actor delighted the fans with his great facade”.

Facades according to their material 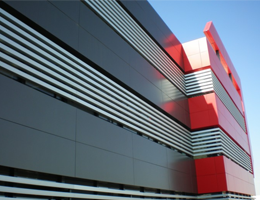 Aluminum facades have been around for more than half a century and are relatively inexpensive. This material is highly resistant, especially effective against fires and termite attacks, although it is important to note that it dents very easily. There are panels of various colors, textures and alignments to choose from.

Stucco has been a material linked to the concept of a facade for centuries; To achieve this, you only need to combine lime, sand and water and you can texturize using different pigments and stones. There are two fundamental methods for making stucco designs, which consist of shaking the mixture or raking it while it is applied. It is worth mentioning that this material dries in a very short time, resists water and is very durable.

A facade made of fiber cement can be very durable, since this material It is obtained by mixing sand, cement and cellulose fiber. It can be found on previously painted panels, which are also fire and termite resistant and require very little work to maintain. Their durability is not to be taken lightly, since it allows many of their manufacturers to offer them with several decades of warranty.

As expected, the wooden facade is one of the most varied, since its raw material can be obtained from a large number of different tree species, among which cedar, pine and redwood stand out. His price It varies according to the geographical origin of the type of wood chosen. Although it offers good durability, it requires maintenance every year.

Building a facade with vinyl is very economical. This material, which is characterized by a great versatilityIt is made with PVC plastic and is available in a wide variety of colors. With regard to its resistance, it is ideal to withstand strong winds and changing temperatures. On the other hand, it should be mentioned that it does not stand out for its durability, since it tends to crack over time. Vinyl panels can be purchased in a variety of styles and do not need to be painted.