The notion of Messiah comes from a Hebrew word and is very frequent in the religion. Written with a capital letter (Messiah), allows you to refer to the Son of God, descendant of David, whose advent into the world was promised by the prophets to the Jewish people.

The Messiah, therefore, is the Anointed, a man with the God’s spirit. The concept is also used to name a being sent by God himself who brings peace to the world and that seeks to restore God’s Kingdom on the Land.

The existence of a messiah appears in different religions. For the Jews, the arrival of the Messiah is anticipated as a revelation of God made through the Torah. The christians They understand that the Messiah will come as God’s king, restorer, and servant, and they believe that Christ is the Messiah.

It was through God’s revelation that the belief in the Messiah for the Jews. A large number of messianic prophecies are recorded in Genesis, thanks to which it would be possible to distinguish him from the rest of men once he arrived on Earth. It should be mentioned that for Judaism the doctrine of the Messiah does not occupy a central position, as it does with Christianity, but this does not mean that it is not significant at certain moments in its history. 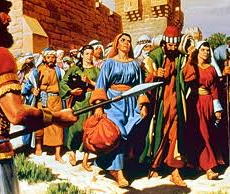 Starting in 607 BC, the Jewish people were forced to leave Israel and Judea for the capital of the empire of Nebuchadnezzar II, during a period known as Captivity or Babylonian Captivity, which ended when the Persians conquered Babylon in 537 BC. stage, the figure of the Messiah acquired a special importance, since it represented the figure of the savior.

The theologian Jewish Maimonides, who lived in the Middle Ages, left behind in his writings indispensable material to understand the concept of Messiah according to the vision of the Jewish people, and he was one of the scholars who was most interested in this subject. He claimed to firmly believe in the arrival of the Messiah and promised to wait for him no matter how long it took.

In the Bible, the figure of the Messiah is shown from very different perspectives, since throughout its pages we see him in such antagonistic roles as absolute king and servant, which profoundly influenced the perception that Christians have of him .

A substantial difference between Judaism and Christianity’s conception of the Messiah resides in the fact that Judaism, through the Torah, promises his coming to the Land to save all the descendants of Abraham, Isaac and Jacob, of the twelve tribes of Israel, while Christianity understands the promise as a gift to all humanity, as a guarantee of redemption for all men.

Beyond the precise scope of religion, the person (real or imaginary) in which people deposit a excessive confidence to achieve a goal or solve a problem. Those who actually achieve a very important and unthinkable goal are also often referred to as messiahs. For example: “Diego Maradona was the messiah of Argentina in Mexico ’86”, “We have to understand that the new Minister of Economy will not be a messiah who will bring us out of the crisis with magic”, “In this team there is no messiah, but we are about twenty colleagues who work with the same goal”, “Michael Jordan dressed as messiah to give the Chicago Bulls a new title”.