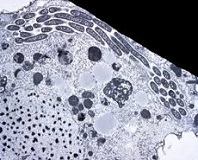 In order to discover the meaning of the term intracellular, it is necessary, first of all, to know its etymological origin. In this case, we have to underline that it is a word that derives from Latin and that it has been formed from the sum of several Latin lexical components such as the following:
-The prefix “intra-”, which means “inside”.
-The noun “cellula”, which can be translated as “cell” or “cell”.
-The suffix “-ar”, which is used to indicate “membership” or “relationship”.

The adjective intracellular is used to refer to what is found or develops inside a cell: the fundamental constituent of a living being, which has the ability to reproduce independently.

The intracellular fluidIn this framework, it is a fluid that is found within the cells. The cellular membrane is responsible for separating it from extracellular fluid and to administer the passage of the substances that are dissolved in both.

It should be noted that intracellular fluid is the main component of the cytosol, also called cytoplasmic matrix. In the case of eukaryotic cells, for example, the cytosol is part of the cytoplasm.

In the cytosol and the cell nucleus, on the other hand, the intracellular receptors. These elements make it possible to identify chemical messengers, such as hormones and neurotransmitters.

Likewise, we cannot forget that when talking about intracellular bacteria, we must take into consideration that there are two very well differentiated models:
-The facultative bacteria, which have the particularity that they have the ability to live both in the extracellular and intracellular environments. In this group we find bacteria such as legionella, listeria or salmonella.
-The obligate bacteria. Under this denomination are those that need the internal cellular environment not only to be able to survive but also to multiply. What’s more, they are not capable of subsisting outside of cells. Examples of this type of bacteria are the so-called chlamidiae and the one also known as rickettsia.

The intracellular digestion, meanwhile, it is a heterotrophic nutrition process that amoebas and other single-celled organisms carry out inside the cell. Thanks to their enzymatic system, these beings can degrade the molecules in vacuoles. The hydrolytic enzymes that allow the process to be carried out are generated mainly by lysosomes.

It is also important to know that this type of digestion must be clearly differentiated from what is called extracellular digestion. What distinguishes one from the other is that, while in the intracellular a digestive system is required, in the extracellular it is not necessary.