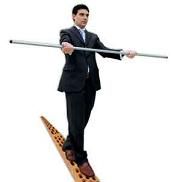 From Latin aequilibrĭum, the term Balance refers to condition of a Body when the conflicting forces acting on it offset and destroy each other.

It is known as equilibrium, on the other hand, the situation in which a body finds itself when, despite having little base of support, manages to stay without falling. For example: “I can’t believe how the bottle was balanced and did not fall despite being supported on such a flimsy table”, “Pedro was walking along the ledge, lost his balance and fell into the void”.

In this sense, we have to emphasize that there is an artistic profession that revolves precisely around that. We are referring to the tightrope walker, who is an artist from the circus world who is dedicated to performing highly complex exercises in balancing on a wire that is placed several meters high.

In the same way, we must not forget that the term in question is also very important within the world of sport. Thus, there is what is known as a balance beam. This is an apparatus that becomes a fundamental piece of artistic gymnastics.

Specifically, it is a wooden bar that is approximately one meter high, about five meters long and 1 decimeter wide, in the case of female rhythmic gymnastics. In it, athletes for a maximum time of 90 seconds have to carry out a series of exercises with which their balance is evident.

Elements of flight, a jump, an acrobatic series, a turn and a mixed series are the exercises that are specifically asked to undertake on said apparatus in sports competitions.

Two weights that are equal and counteract each other or two counterbalanced bodies are also in equilibrium: “Please try to carry the bags to the other side of the boat to distribute the weight and promote balance”, “I have to place some stones on the left side of the model so that things are balanced”.

In many areas of our current society the term balance is also used. Thus, for example, in politics people usually talk about what the balance of power would be, which is used to reflect the fact that different countries try to maintain a good relationship with the rest of the states within the scope of international politics with the clear objective that none of them wield the maximum power over the rest.

In a symbolic sense, equilibrium refers to the harmony between diverse things, moderation, equanimity, good sense in judgments and acts of compromise. The person that acts with balance manages to travel through various paths without falling, that is, without losing control or being damaged.

“Some nights I go out to have fun but on others I prefer to stay and rest: I need to balance so as not to neglect any aspect of my life” is a phrase that a young man can pronounce when commenting on how he manages to combine fun with responsibilities.

“He thinks that I should never leave this job and I want to resign tomorrow: the best thing will be to find a balance between both positions” is another example of the use of this concept.